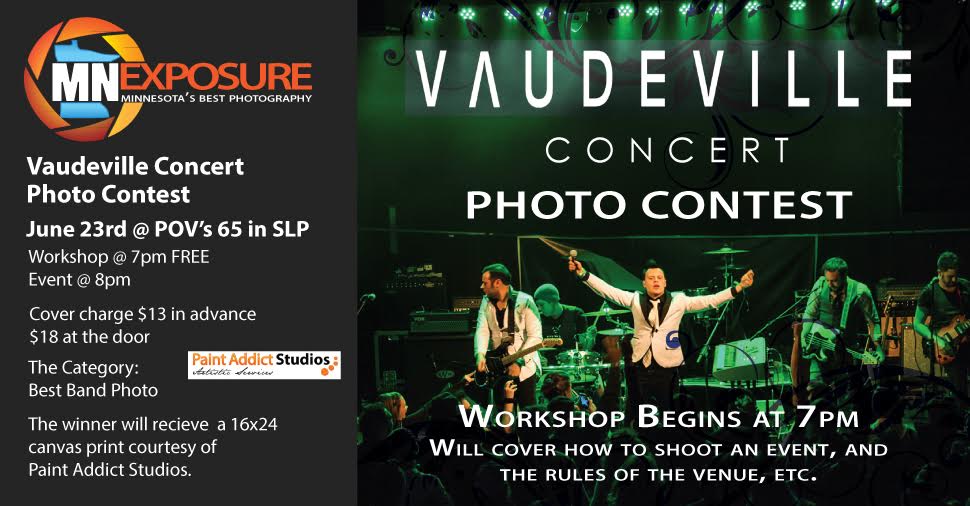 We’re extremely excited to offer another event photography contest and workshop opportunity to learn about event photography with Vaudeville  and Peter Berman! Tuesday, June 23rd, Vaudeville  will be performing at POV’s 65 in Saint Louis Park. The doors open at 7 PM and that’s when the workshop begins. Peter will cover the basics of event photography and will be available during the event to provide tips and feedback. The photo contest will consist of photographs taken of Vaudeville that evening. The winner of the contest will receive a 16×24 canvas print from Paint Addict Studios. Tickets are $13 in advance of the event, and $18 at the door.

Peter Berman, our guest judge from the Dow Art Gallery competition will lead the free event workshop. He’ll be covering the basics of event photography as well as how to work with the photography rules mandated by venues. If you have questions, Peter’s the guy to ask!

As the term ‘Vaudeville’ implies, this Minneapolis-based Alt. Rock band does not disappoint. With a unique style and variety to their music, Vaudeville has created a new direction of music bringing together the energy of raw rock and roll with the tightness and diversity of electronic music. Each member donates a different musical history and flavour, all combining for a stadium rock sound, not to be missed.

Peter has a wealth of experience as a videographer. He started shooting 16mm motion film as a “stringer” for WPIX-TV in New York, and worked as a television news video journalist as ABC’s flagship station in New York for 30 years.

He is currently a member of the Minnesota Nature Photo Club, and his number one passion is wildlife. He has traveled to Africa in pursuit of wildebeest, cheetahs, lions, zebra, elephants and dozens of other animals; to Brazil to photograph piranha, capybara, tarantulas, and macaws in the Amazon; and to Alaska, for reindeer, wild salmon, owls and eagles.